That’s good, Steve! I was just going by what others have been saying on here about much more dramatic rises in the RFL...

And the confusion is added to by many government leaflets and websites saying CO2 but not whether NEDC or WLTP, However, I am afraid the which site is quite clear what they think and its bad news:-

"The change in CO2 measurements and car tax: NEDC to WLTP Increases in measurements of the CO2 a car emits are the result of changes to the official test. Instead of the previous unrealistic (and much-criticised) ‘New European Driving Cycle’ (NEDC), the more realistic ‘Worldwide-Harmonised Light vehicles Test Procedure’ (WLTP) is now used. NEDC CO2 values The NEDC test didn’t strain the car, and was open to a number of potential loopholes, including: The test is conducted with air conditioning, lights and heated windows off, thereby improving efficiency and reducing CO2. There is a tolerance for the testing to be carried out at 1.2mph below the required speed, meaning less fuel is used. Roof rails, extra lights and even the door mirror on the passenger side are allowed to be removed. This makes the car lighter and, therefore, more fuel-efficient. As the car was not strained, and manufacturers may have used these loopholes (and many more) to get better fuel economy, it meant that official CO2 values were kept artificially low. As first year tax is based on official CO2 rates, it means we have technically been paying more favourable rates than we should have done. WLTP CO2 values With support from our own ‘Come clean on fuel claims’ campaign, new generations of cars released after 1 September 2017 are now tested using the WLTP (Worldwide-Harmonised Light vehicles Test Procedure). All remaining new cars have had to go through the WLTP as of 1 September 2018. The WLTP closed all the known loopholes with the NEDC and is a much tougher cycle (although not as tough as Which? lab tests – see below). This means that fuel economy and CO2 figures from this test are higher and more realistic. Despite this new test being introduced in 2018 for all cars, the CO2 figures you see in car brochures and dealerships – and which are used to set first-year tax rates – are the WLTP CO2 figures converted to NEDC figures. That means we’ve continued to pay tax rates based on lower-than-realistic CO2 measurements. But that comes to an end this month. As of April 2020, CO2 values displayed in brochures and used to set first-year tax rates for new cars will be the direct WLTP results.

I am afraid Carwow and Autoexpress clearly come to the same conclusion. I have yet to find a site that provides the detail come to the opposite conclusion.
2019 Macan S Porsche code PKW8WKI8
Top

I had this reassurance from my OPC's SE today regarding the fixed price as I have paid in full with the re-agreed p/ex being honoured too:

"I can confirm it hasn’t been taxed / registered yet.

We will be continuing as we previously agreed, hopefully this is sooner rather than later.
The increase in road fund licence will be paid by us too."
Steve

Further to my earlier post, the Vehicle Certification Agency (link below) makes it clear that from 1 April 2020 it is WLTP figures that will apply.

The Macan GTS is in the highest range of 255 g/km plus according to Porsche's Technical Data sheet for the car. SAC1 should hang on to his OPC's undertaking to pay the increase, it could be valuable.
Peter

Does everyone know the Treasury is reviewing the current tax system?

One of the proposed options is to base annual road tax on a car's first year rate every year. So the Macan would not only increase to £2,175 from 01/04/2020, we would pay £2,175 (rising with inflation) every subsequent year.

To make matters worse, the Treasury is planning to retrospectively change the VED system to existing cars registered after 01/04/2017. So Macan GTSs registered before 01/04/2020, would pay £1,305 (rising with inflation) in subsequent years.

I mentioned elsewhere my BMW dealer has not offered to protect my price. My car is awaiting transport to the dealer and so cannot be registered as planned on 30th March so the tax goes up by £750.

So if you can get the dealer to do that well done. I hope they do not change the system now again. I am getting rid of a big diesel with low emissions because the government ruined their value! My Macan GTS is still on order I hope which replaces another big diesel whose value has been hit!
Top

Well this tax thing prompted me to email Porsche GB and I received this reply via my OPC....
"Porsche Customer Services have contacted us to confirm the road fund licence for your new Macan.
Your car falls into the Co2 category of 191 – 225.
So based on the below tables we previously discussed this makes the 1st year RFL £1,305.
An increase of £25 from £1,280, which was the previous RFL.

Looking at the GTS Technical Data sheet on the configurator today, it now shows the emissions value as 255 g/km. If that becomes the accepted value then first year car tax will be £1850. Let's hope so as that is better than £2175.
Peter

But not if as some reports speculate this will also be the annual rfl for the next 5 years too.
Steve

Whats more interesting is that when you load your config or add extras, like bigger wheels etc the CO2 figure changes from the base - tried adding things to an S and got it to 257, My GTS config goes to 258, so its a dynamic figure based on selections. 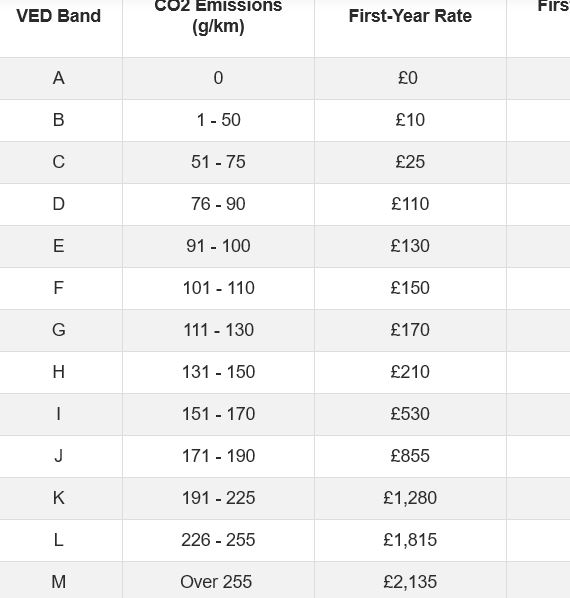 Copyright 2020. Not associated with Porsche.