First post. Many thanks for this hugely useful forum. Just purchased the Kufatec dongle for disabling the Automatic Start/Stop (maintaining last selected position) and it works great

It solved my biggest problem with the car as it is a real pain to have to switch it off every time.

One word of advice; the bonnet must be opened before inserting the dongle for programming. Otherwise it doesn't work!

I am really interested in getting the speed limit indicator dongle. I wrote to Kufatec (with VIN) inquiring whether it would work in my car and they replied twice that it wouldn't. However, reading in this thread I conclude that it should as I have both PDLS+ and Lane Keep Assist. Can someone help with guidance on this please?
2019 Macan Base, Dolomite Silver, Agate Grey Leather and too many options ...
Top

I have just returned from a week in Germany and am interested in this product. Despite having lived in Germany for about 20 years, keeping track of ever changing speed limits is becoming increasingly difficult. Many of the towns/villages now have 30 kph zones, often marked by a white '30' painted on the road surface. Sometimes there is so much visual clutter that it is easy to miss a change of speed limit.

In addition, the number of speed cameras has increased in recent years, and they now look like this - not that easy to spot in built up areas: 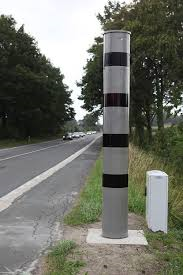 On the autobahn, despite some unrestricted sections, there are many zones where the limit changes from 130, to 100, to 80 and back often over relatively short distances - within a few miles. Waze struggled to keep up with the limit changes, and often missed the '30' zones in the built up areas.

I have a couple of quick questions about the speed limit indicator - either fitted OEM or retrofit:

- How does it cope with German built up areas, where the town/village name sign (example below) implies a 50 kph maximum, without actually stating a numerical limit? 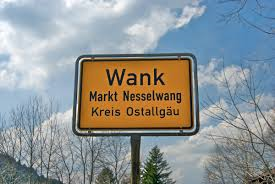 - How good is the system at reading limits painted on the road? (Especially when just a white number rather than a painted circular limit sign?)

- Does it cope with targeted speed limits? To explain, coming back towards Calais/Eurotunnel on the E40, there were several speed limit signs with a supplementary white rectangular sign underneath saying (for example) '3.5 t', implying that the limit was only for HGVs. Similarly, in Germany, some autobahn sections have noise abatement limits that only apply at certain posted times.

I'd be grateful for user feedback, particularly on the continent, before I commit to purchase. Many thanks!
Top

I can't speak for the OE Porsche version or the Kufatec dongle, but Mrs P'S TTS has the factory fitted speed limit indicator and it is patchy at best.

It often misses part-obscured signs (fairly obvious but worth mentioning,) often misses overhead "smart motorway" variable limits and certainly doesn't change from 130 k to 110 k in France when it's raining for example.

Whilst fairly clever (using a combination of Nav info and the car's camera) there is no substitue for a keen-eyed co-pilot (or indeed driver!) Nav information is often out of date and the camera has no intelligence built-in to cope with the various scenarios you mention.

I agree with Paul, you still have to rely on your eyes and pay attention to the signs.
As you mention some autobahn speed limits differ for lorries and then again if it's wet or nighttime. The car's system would not pick these nuances up, it just reads the number. One still needs to use their brain.

I would say that the speed limit recognition is good as a back up, because when you see the number in your MFD / instrument binnacle, it prompts you to think about it / question it.

But don't get me wrong - I fully agree that such systems are a backup and I currently use both Waze and the (increasingly out of date) inbuilt satnav as similar backups. I did the iAM Advanced driving test last year, and had no problems with road-sign or speed limit attentiveness (is that a word?), nor do I generally struggle in UK. Additionally, I don't generally purchase or use other driver 'aids/backups' such as cruise control, LKA, reverse cameras, dimming mirrors, auto dipping lights etc, etc.

But when overseas, unfamiliar signs and road-markings do make a difference - and whilst of course there is the need to be even more attentive when in unfamiliar surroundings, it would be good to have an even better backup. I would also argue that a driver who is overly-focussed on trying to ascertain the current speed limit (amongst all the other road-clutter) may be distracted from more important all-round observation. My questions were an attempt to establish whether the Kufatec (or OEM) system works reliably enough to justify the expense - hence some specific questions that came to mind whilst driving around Europe last week. I am leaning towards not bothering

I am leaning towards not bothering

My questions were an attempt to establish whether the Kufatec (or OEM) system works reliably enough to justify the expense - hence some specific questions that came to mind whilst driving around Europe last week. I am leaning towards not bothering

Definitely worth speccing OE as a relatively small cost. It has saved me on a number of occasions on unfamiliar stretches of road.

Often now you are faced with speed limits that vary constantly. On a town dual carriageway, that i know well, it recently changed from 40 mph to 30 mph. Several people have already been ticketed as they have not take onboard that it covers the whole length of it.
Last edited by SAC1 on Fri Oct 11, 2019 2:43 pm, edited 1 time in total.
2020 model GTS in Sapphire blue awaiting delivery on 1 June.
(sold) 2017 SD in Rhodium Silver.
Top

I had the speed limit recognition on my old BMW 535d and it was often wrong. In the Macan Im yet to witness incorrect information, but I only drive in the UK. It also picks up other signs such as no overtaking, which can be useful.
The reason I went for the Kufetec upgrade was because it was one of the things missing from my highly spec’ed Macan and I was used to it in my previous BMW. No complaints so far
2017 Macan SD in Volcano with 21” 911 wheels, full black leather. Air, PASM, sports exhaust, pano roof, Sports Chrono, 18 way seats, BOSE, ventilated front seats, heated seats front and rear, speed limit display, active cruise, PS plus and more
Top
Post Reply
18 posts

Return to “Electronics and In Car Entertainment”

Copyright 2017. Not associated with Porsche.